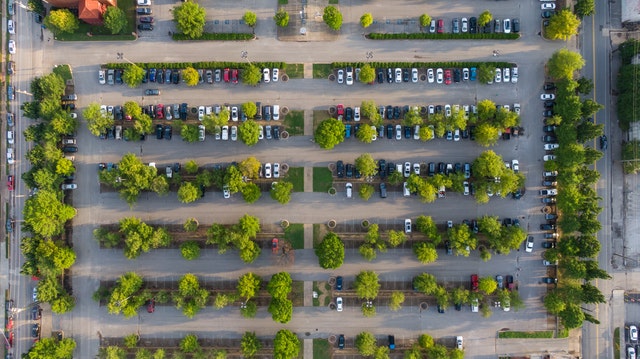 There are few things more contentious in urban planning and community engagement than parking. At the risk of mixing metaphors, it’s the third rail of traffic management — touch it at your own risk. And yet changing how cities handle parking could be the key to the survival of Main Streets and downtowns. It could also help our air and water become less polluted, and our streets less dangerous and less congested.

A 2017 study by INRIX found that Americans spend an average of 17 hours a year driving around looking for parking spaces, but studies have also found that most parking spaces go unused, even on the most crowded shopping days of the year. This is not simply a case of “Lies, white lies and statistics,” rather it indicates a mismatch between the perception of parking supply and the perception of demand.

Like any real estate, the three keys to parking are location, location and location. People prefer free parking to paid parking, and parking spots near their destination to more distant ones.

In some cases, such as Disneyland, people have been known to walk considerable distances after parking, but in many cities people will circle the block despite available spaces a short distance away. One of the key reasons for this behavior, it is believed, is that parking is underpriced — and often free. At resorts, like those run by Disney, people will park further from the entrance in order to save money; in a city, people would rather get a free parking spot near their destination than pay for parking nearby or use a free space just a few hundred feet away.

Combining underpriced parking with municipal ordinances requiring that businesses, apartments, and other buildings provide it has many deleterious effects.

It encourages people to drive more often they would — increasing wear and tear on the roads as well as creating more potential for crashes. It makes walking and biking more difficult, because destinations get pushed far apart by their parking lots. And it contributes to the urban heat island effect by increasing the amount of heat reflecting impermeable surface in the city.

Also, parking lots hardly produce any property tax revenue for the city, which can hurt the bottom line or require higher taxes elsewhere.

One solution is to permit businesses so they share parking and charge for it dynamically.

Spaces can be reserved on a smart phone app with the pricing updated throughout the day to reflect usage. Pricing information would be based on the actual usage, while that information could be used to further fine-tune traffic demand management.

To really make this work, cities will need to get rid of their mandatory parking minimums. They result in oversupply and more expensive development.

Another curious problem tied to the oversupply of parking is the tendency of business owners to complain that no one shops at their stores because there’s no parking. In reality these owners are often preventing people from becoming customers by parking in front of their own stores, as The Bangor Daily News explained.

It’s well understood that the parking demand for, say, a school, will be higher when school is in session instead of on Saturday. Businesses need very little parking when they’re closed, and homes don’t need parking during the workday.

Understanding when demand is highest can help set the prices for peak times. Similarly, smart cities can analyze data to determine which spots are most in demand and price these accordingly. The greater the demand, the higher the price should be.

It is a loss to businesses that people traveling downtown to a restaurant or a small business cannot park in a convenient spot in an underutilized lot owned by a Walgreens or small shopping center — instead having to choose a garage or drive around looking for on-street parking. Some customers may give up and go elsewhere, while others may waste fuel or suffer from road rage.

Pricing parking works by metering all spaces, not just on-street spots, and charging prices that aren’t so high people abandon downtown and not so low it doesn’t solve the problem. According to Donald Shoup, parking should be priced so that it’s about 80 percent used all the time. This would ensure spaces are always available while dispelling the myth that there are none.

Such pricing would generate additional revenue and allow cities to convert some underused parking lots into something else.

The true cost of parking lots

Despite an outward appearance of asphalt and paint, parkings lots are actually expensive — for an entire community.

Their upkeep creates a drain on a business’ resources. And, even if a business didn’t pay to build the lot, it is paying higher rents as the costs get passed on to them. Businesses, in turn, pass on those costs to customers.

If the parking lot ends up not being used, it should be easier for the business or city to redevelop it.

As mentioned earlier, lots are often large areas of asphalt or tarmac, impermeable surfaces that don’t drain. Instead, rain washes detritus left behind by cars into the wider environment, which is a serious ecological issue. In the summer, they reflect heat into the surrounding neighborhood, which makes the urban heat island effect worse.

Regardless of the time of year, parking lots produce little revenue for the city. Where possible, an underutilized lot could be redeveloped as housing, commercial, or mixed-use space — or even as a city park.

These approaches are being tried around the world with great success.

At the municipal level, San Francisco conducted a successful pilot of SFPark in the summer of 2011 before adopting it in 2017. Price changes were announced in advance, and after large initial shifts as the program got started, things settled down quickly and price changes became less frequent and less in value, according to Streetsblog.

At a more decentralized level, a British company called Your Parking Space announced it was helping 100 churches earn 20,000 pounds a month (about $27,700 at today’s exchange rate) by letting them monetize their parking during the week, since demand is minimal except on Sundays, according to Tech Digest.

As the experience of San Francisco and other cities show, parking can be managed in a way that benefits local businesses, drivers, the city and the environment. Local officials and other stakeholders may be wary at first — after all they are accountable to the public — which makes getting good mobility data and analytics an important part of winning them over.

Every city can be smart, it sometimes just takes good data, analytical decision making, and a little creativity.